The Plumer Schoolhouse was originally a log cabin constructed circa 1857, serving as a combined meetinghouse, church, and school. It was located west of the log cabin home of Johann H. Plumer, which was on the homestead site. Instruction was given in German by "missionary ministers".


In 1867, the Salem Lutheran Church was founded, and in 1874, the Mills County School District was drawn up.

A record dated March, 1875 states that the school, which had replaced the log cabin, was required to have a fence placed around it. The wooden structure, photo circa 1875, was built with a front entrance that featured two doors (one for the boys and one for the girls).

The name of the school was changed from Plumer School to Oak Bluff #2 during the 1899-1900 school year.

In September 1929, an entryway and a new porch were built. Also, two swings and a merry-go-round were purchased. A storm cave was added in 1932. The photo circa 1945 shows the entryway and porch addition. 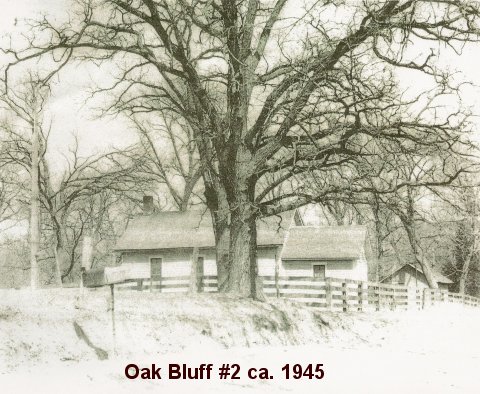 The teacher would arrive early to get wood or coal from the shed which was east of the schoolhouse and water was carried from a neighbor's well. A pot-bellied stove heated the building and was located in the center of the room. Ink would freeze during the winter months, so pencils were used.

Children were leaving Oak Bluff #2 School and "going to German School" as late as 1900. Speculation is that would have been Confirmation School at Salem Lutheran Church.

May Day was special as everyone brought homemade candy and made May baskets. The teacher and all of the students would then pick wildflowers in the surrounding timber and place in the baskets to take home.